Currently based in Melbourne, Australia, Wayne is primarily a solo bass player, writer and producer, and has his own record label. Wayne has CD’s out and on radio in the smooth / contemporary Jazz markets in USA, Europe & more. They feature top USA players Rick Braun, Philippe Saisse, Isaiah Sharkey and Mike MacArthur. Joining Wayne for the Australian contingent are Fallon Williams III and Ron Peers . Prior to this, for over forty years, he was a sideman in the Australian music scene, touring and sessions. 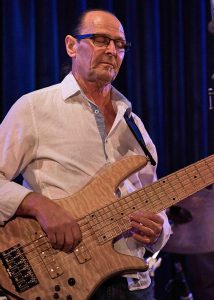 Wayne Jones dusts down and dresses up Sweet Melody, in a remix of the track from his 2015 release Mr Jones. Back then I referred to the tune as “brisk, breezy musical stroll” and nothing’s changed there but five years on, with a new coat of paint, this joyous melody is the pick-me-up we all need in world full of so much darkness. While the motor purrs underneath, above the clouds Wayne and his band of first class musicians weave their magic. It’s all class, the silky stuff you pull out of the back of the locked cabinet once the kids have gone to bed. Read More ►

In a relatively humble intro, Jones’ bass sound casually strolls into the track, simply nodding in acknowledgement of its presence before a vibrant, electric, synth-led motif signals the arrival of the serious stuff. The groove has begun, the extraordinary musicians are all onboard and there’s some mighty fine, freewheelin’ chops happening. Meanwhile Jones is punching and poking through with his bass lines, exploring, listening, finding the gaps and leading the way. The dramatic motif momentarily returns to add some spice and exits just as quickly, leaving pianist Philippe Saisse to take the baton and run with the groove, laying down some sweet Vince Guaraldi style tinkerings. The musical conversation lingers, tastefully and considered, fading out at a mere three and half minutes of commandingly played, luxuriously smooth sounds, then … I guess they’re done. Read More ►

LET THERE BE BASS

This one pops with an elastic swagger as Jones bends and caresses notes, taking on the lead melodies while somehow laying down the bottom end simultaneously. It takes an extraordinary breed of musician to execute such expertise and expression and on Let There Be Bass, Wayne Jones is at his virtuosic best. As always, drummer Fallon Williams navigates the musical traffic flow with ease and offers the perfect foundation for all to groove upon. Guitarist Isaiah Sharkey dabs a couple of wah wah coloured sweeps to the canvas, as the bigger picture emerges. Rick Braun accepts his time to shine with delight and contributes a sublime fugal horn solo mid-song. By now they’re all in the pocket, submerged in a warm, hearty soup of a song that you just can’t get enough of. Read More ►

Greg Phillips ~ Australian Musician Magazine
Continuing to bring the thunder from Down Under on his new 5-track set MR. JONES, Australian bassist, songwriter arranger and performer Wayne Jones, a renowned session musician who launched his solo career in 2006, keeps that perfect balance between tunes that are lush, melodic and sophisticated and others that showcase his freewheeling and wildly energetic ways. Working with top genre stars like Rick Braun and Grammy-nominated keyboardist Philippe Saisse, who is featured on “5 To 6,” Jones creates a dynamic array of moods, from the bright and brassy new single “A Day at the Beach” to the strutting and funky “Get Up” and light and breezy “Sweet Melody”. Another highlight is Jones’ buoyant Latin excursion “The World Keeps Turning.” You’ll enjoy experiencing the wild, wonderful world of MR. JONES!Johnathan Widran ~ Smooth Jazz Global

‘Mr. Jones’ takes the thread to its natural conclusion. Wayne Jones delivers a perfectly executed and impeccably polished sound, where each and every note can be savoured. It defies logic that the musicianship bar could be raised any higher, yet here it is. Five new stunning tracks, intricately constructed, perfectly played and … well … even more sophisticated! As always, Jones can funk it up with the best of them yet at other times it’s difficult to fathom that the licks being played are coming out of a bass, such is the fluidity. Read More ►

THIS IS THE ONE!

After two impressive releases over the past five years, premier Australian bassist/composer Wayne Jones’ brand new album, CLOSED FOR THE HOLIDAYS has just arrived, and it features his best work yet. Using a food analogy, the six tracks on this new CD are like a gourmet recipe… sophisticated but not stuffy, incredibly tasty, creating so much contentment going down that you’ll absolutely want to prepare it time and time again. You’d be hard-pressed to name a favorite tune, as every one of his originals is incredibly delicious. Mr. Jones really wanted to expand his sound on this project, so he invited trumpeter Rick Braun and sax-man Mike MacArthur to guest. Excellent choices! Wayne’s excited about the possibilities involved in taking CLOSED FOR THE HOLIDAYS to the World, and says, “I really have a great feeling about this one. I feel like I have arrived.” Indeed you have, mate. This is the one!

A few weeks ago, I received the new album by Australia’s bass player Wayne Jones. To broaden his sound he invited two special guests to this project, Mike MacArthur on sax, and Rick Braun on trumpet. And again Wayne proves that he really can pull it off, he knows how to make an album that is considered his best to this date. Read More ►

There’s a reason why you don’t hear so many solo albums by bass players … and no … I’m not about to launch into an onslaught of bass player jokes. The real reason, and any musician will know this … is because only the very best bass players can be technically skilled and creatively inclined enough to pull it off. Read More ►

It is paved with spiky, spine-tingling bass lines, the Saturday Street that Australian jazz artist Wayne Jones walks on. Saturday Street, Jones’ latest album, is a glistening summer soundtrack that bathes in the pulsating energy of city life, from sun-drenched strolling to a midnight slow jam at a club. On the title track Jones’ bass feels like a living entity; it throbs with vigour and swagger while jumpy piano adds further electricity. Read More ►

All About Jazz Magazine

First off, you need to know that this is a smokin’ album! From Down Under (Melbourne, to be exact) comes one of the hottest bassists I’ve heard, who’s assembled an astonishing collection of tunes and performances for this new one. Read More ►